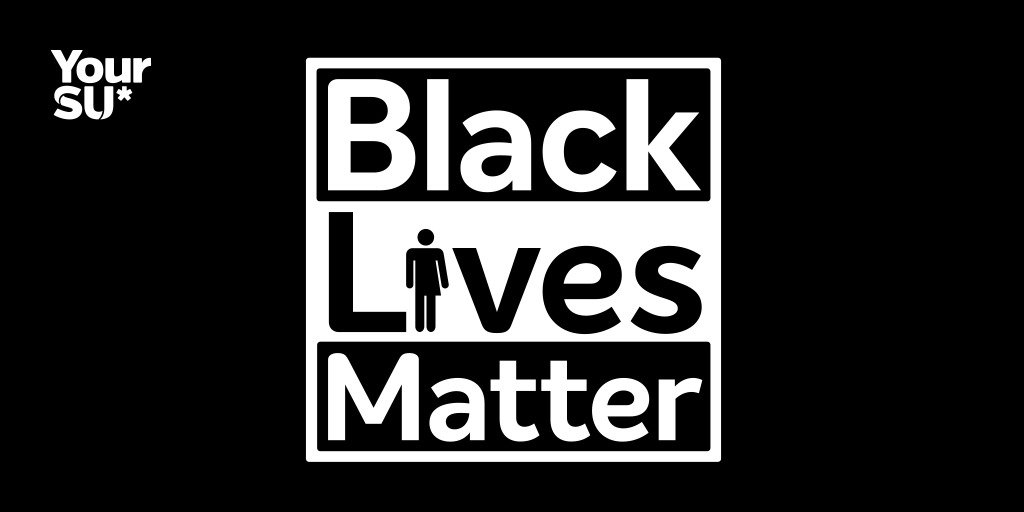 “It’s not enough to be not racist, you must be actively anti racist” – Angela Davis

Anti-black racism has been brought to the world’s attention.

Following the murder of George Floyd by Minneapolis police officers, America has said enough is enough and wants to take action against the racist systems that allowed this to happen. We’ve all seen the viral footage circulating the last few days of protests bringing the #BlackLivesMatter movement to the forefront. This is not applicable to just American citizens, this is a movement that the world needs to stand up for, including your Students’ Union.

We refuse to be silent on this issue.

It’s important to educate yourself, use your voice, sign petitions and stand alongside.

Black Lives Matter was founded in 2013 in response to the acquittal of Trayvon Martin’s murderer. Black Lives Matter Foundation, Inc is a global organisation in the US, UK, and Canada, whose mission is to eradicate white supremacy and build local power to intervene in violence inflicted on Black communities by the state and vigilantes. To educate yourself on the movement see their website here.

Black people have lived through a long history of racial injustice. This is not new, only thanks to camera phones and social media, the rest of the world are now becoming witnesses to the horror Black people face every single day. This isn’t their battle to fight alone.

Here at Sunderland Students’ Union, we pledge to stand with you.

We pledge to fight against racism.

We pledge to be an ally of you all.

Below we’ve listed resources that you can read to help educate yourself and each other, to become better allies to the Black Lives Matter movement:

Fund racial justice, where to donate:

Community-based non profit that pays criminal bail and immigration bonds for individuals who have been arrested while protesting police brutality.

A black and LGBT led organisation that is committed to dismantling systems of oppression & violence, and shifting the public narrative to create transformative, long-term change.

Coalition that advocates for and invests in community led safety initiatives in Minneapolis neighbourhoods.

Online platform and organisation that utilises research based policy solutions to end police brutality in America.

Below is a video that we created to also support this movement.

Find us on Google Maps